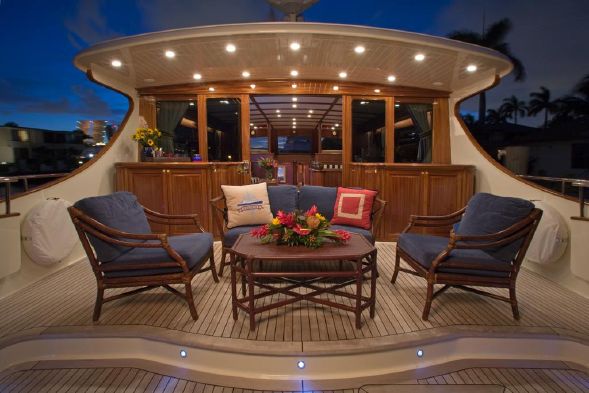 Wow! A big thanks to the almost two-dozen of you who took the time to send in your appreciation for last week’s Steinbeck quote from Sea of Cortez.  A client of mine said this about that:

“This quote sums up exactly why I decided to build my custom boat.”

That nice thought leads me today to take a break from talking about Reliant Yacht’s standard models to explore the exciting world of custom-builds. Specifically, the process of it all. But first, as a refresher, the quote in question:

And a boat, above all other inanimate things, is personified in man’s mind. Some have said they have felt a boat shudder before she struck a rock, or cry when she beached and the surf poured into her. This is not mysticism, but identification. Man, building this greatest and most personal of all tools, has in turn received a boat-shaped mind, and the boat, a man-shaped soul.

Steinbeck spent enough time at sea to recognize there is a kind of dialog, a close interplay between boats and their humans. He called it “a most passionate relationship,” and who am I to argue with the winner of both the Pulitzer and the Nobel?

There were virtually no production yachts when he wrote  Sea of Cortez . Until after the war, virtually every boat was a custom-build. For example, in the 1930’s Ernest Hemingway (another Pulitzer/Nobel double threat)  saw an ad like this for Wheeler Yachts of Brooklyn NY: 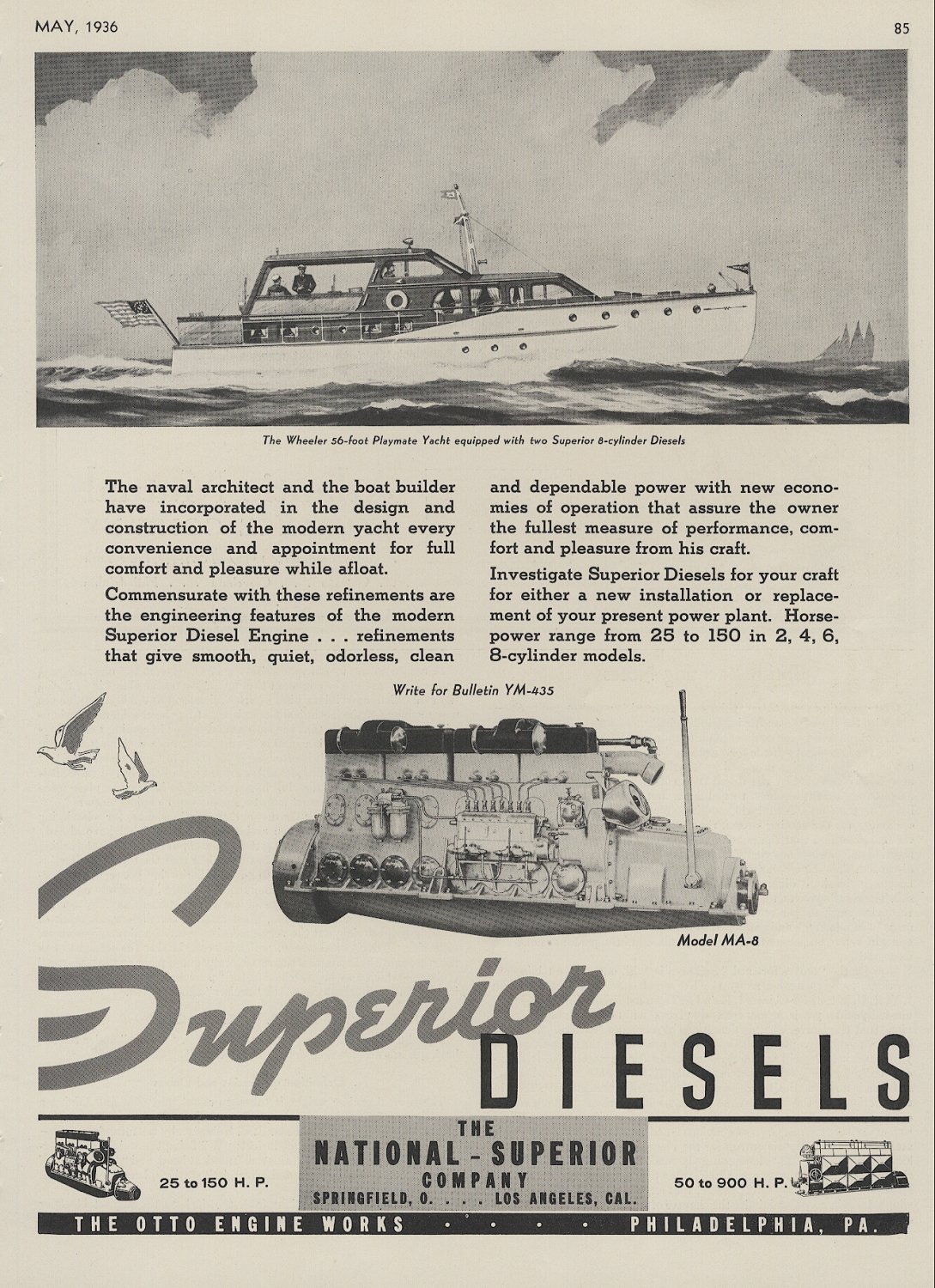 Note the partnership of  “the naval architect and the boat builder.” Wheeler Yachts had no stock plans or boats. And even if they did, Hemingway had very particular ideas about what exactly what he wanted in his sportfish (the specifications part of his contract ran twelve pages). So he came up to Brooklyn, and followed up with almost fifty letters to the builder (most of which have been preserved).  In the end Wheeler built him his Pilar — exactly the boat he wanted — for the princely sum of $7,495. And he fished the hell out of it! Here he is, trolling off Havana: 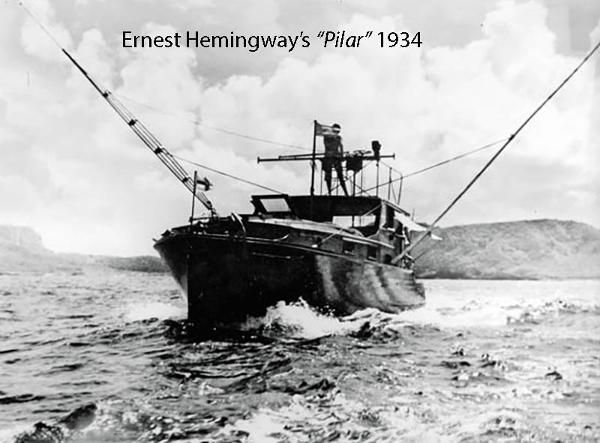 Ernest did it right. I’ve been fortunate to participate in over twenty custom-builds in my time, and more than anything its the process that fascinates me. It is rewarding on so many different levels – as a thrilling business enterprise, as a challenging creative endeavor,  and as the foundation for some really wonderful friendships.

The process usually begins with an image that springs from somewhere deep in a client’s cerebral cortex (now there’s a New Yorker cartoon for you). In one of my builds it was an image of a classic yacht sporting the proverbial “bone in her teeth.” Something a little like this: 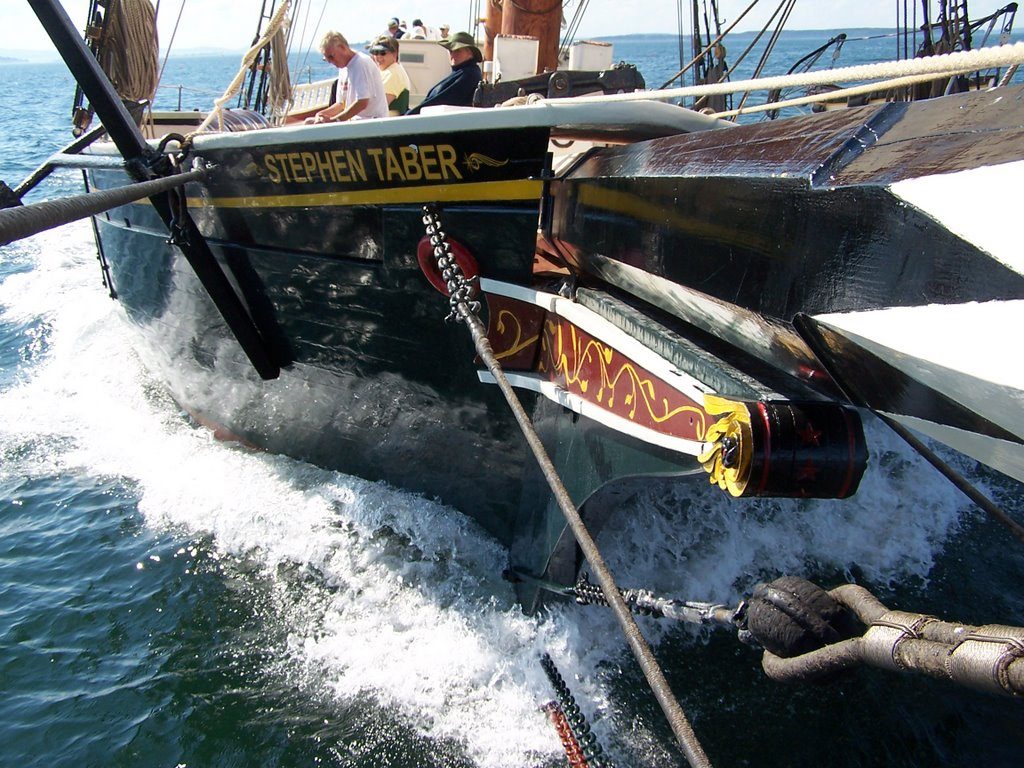 The very first conversation I had with this client went this way:

“It’s all about the bow for me. I’ve got this thing about a fine forefoot and a clean entry. Can you guys draw me some ideas around that?”

Now,  Essence, our 2006 Vicem 85 listing, began with a different kind of image. The owner had a vision of a formal salon, one that would be completely at place in a fine Palm Beach estate. After many conversations spanning many months, this elegant sketch emerged: 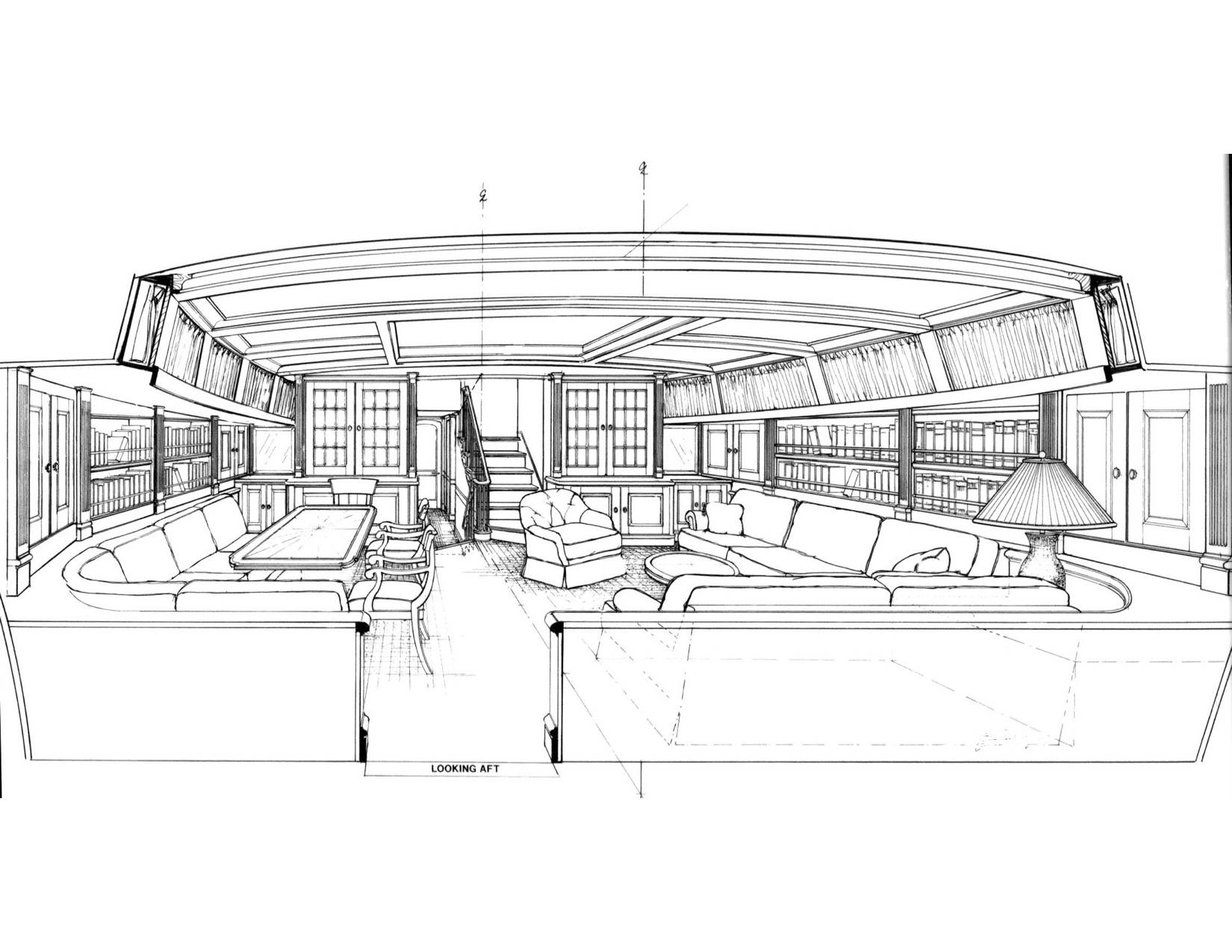 Which, in the end, led to this absolute stunner of an interior: 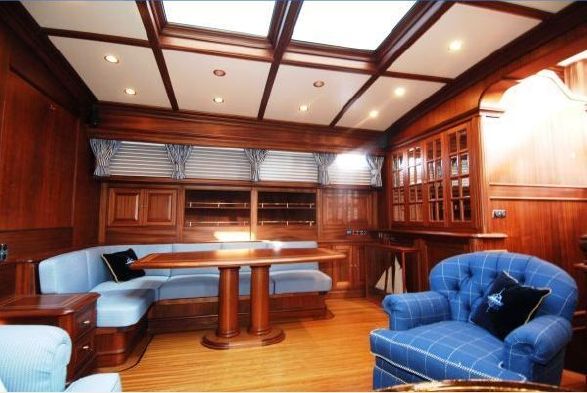 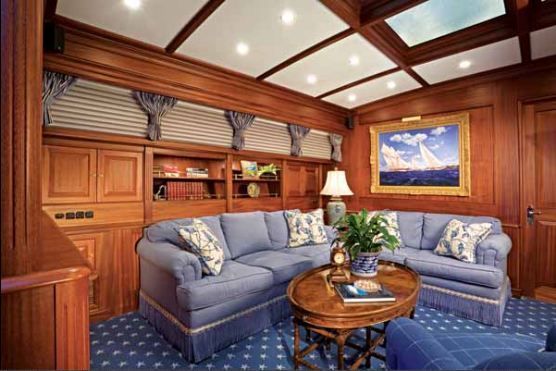 And the yacht we built around it is equally stunning. Speaking about a fine forefoot and a clean entry, have you ever seen a more perfect bow wave than this? 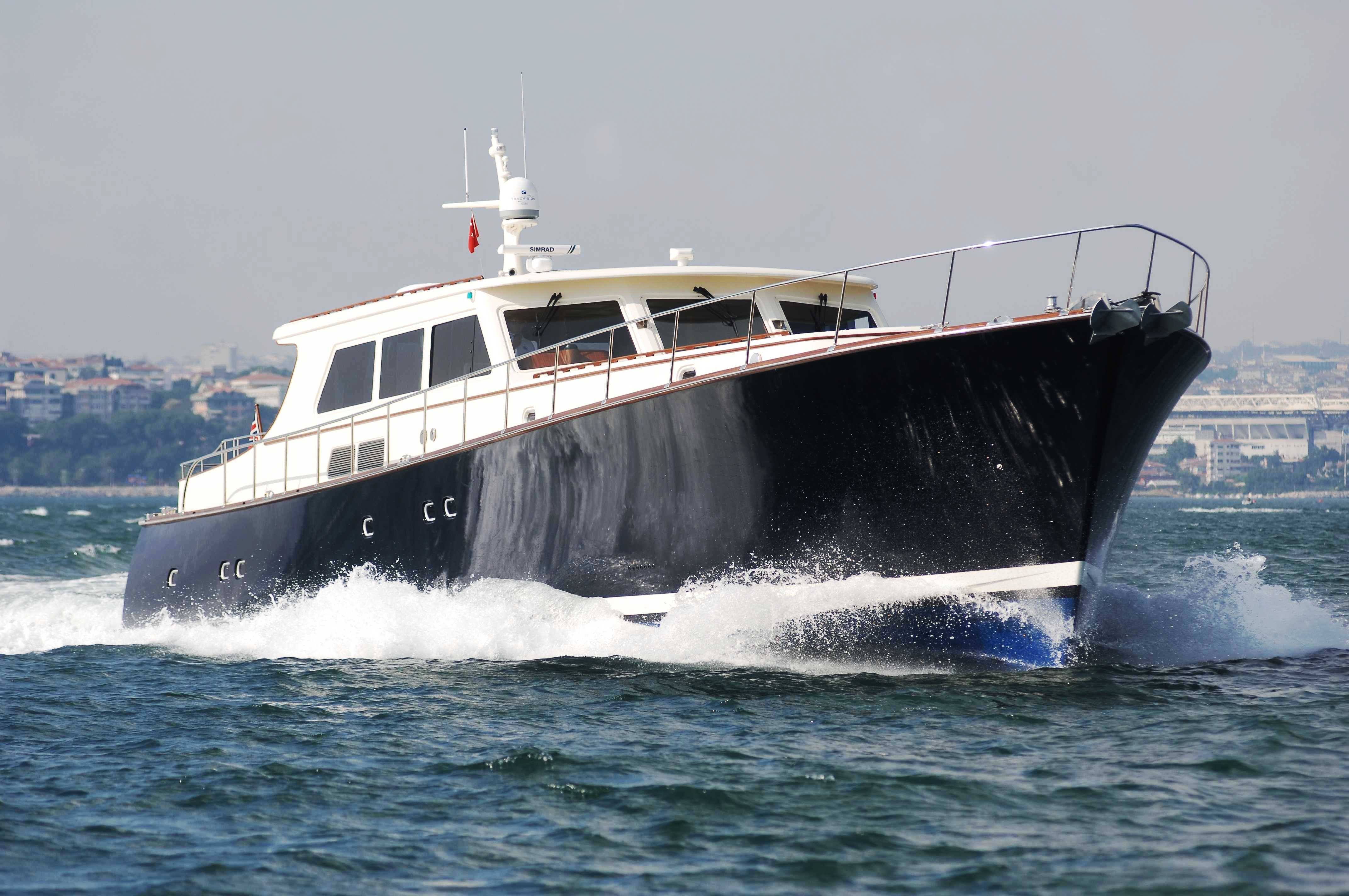 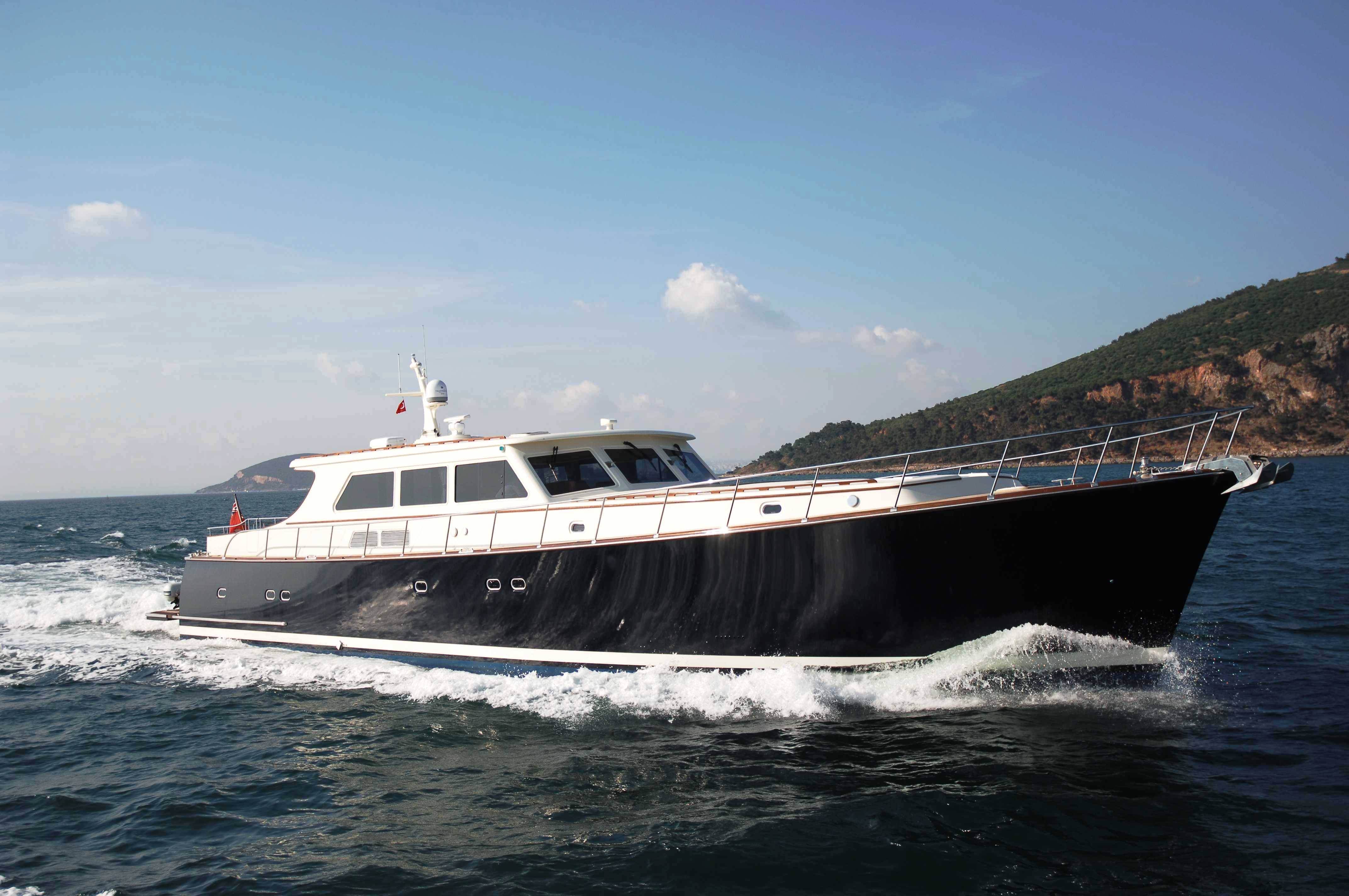 A complete photo array can be found on this complete listing, with video’s to follow next month:

I’d be delighted to show her to you during the Fort Lauderdale Boat Show, from November 1st through 5th. Please call me for a private and unhurried viewing on this unbelievable custom-built treasure.

Essence came together in the early days of boat design autocad, before 3D modeling and other refinements. Designer and builder bandwidth, both literally and figuratively, has increased exponentially in the last decade. At the design stage, what used to take months and many air miles now takes just days and weeks, supported by jetlag-free video chats and shared digital workspaces. And monitoring tools allow clients and designers to watch their dreams get built, in real time, through 24/7 video cameras. Way cool.

Here’s a good example of how fast and how well custom builds can now proceed. We are building three (!) sold Reliant 40’s right now. Each is different from anything else on the market, and different even from each other (one each in fiberglass, cold molded composite, and aluminum.)  They have three different drive systems, too. The build didn’t come to us with an image, per se, but rather as a footprint. It has to fit into a particular space, and the space tolerances are to within 1/4 inch. That’s where autocad really comes into its own.

This was our first take on it, blueprint style:

Last month I watched our design team work on this project in Istanbul. Before multiple huge Apple monitors the team made adjustments to the seat angle at the helm. With each degree of radius, the reach to the throttles and electronics was measured to the inch, to not exceed the owner’s exact specifications. It was a remarkable exercise, and when it was done we could proceed with this plan: 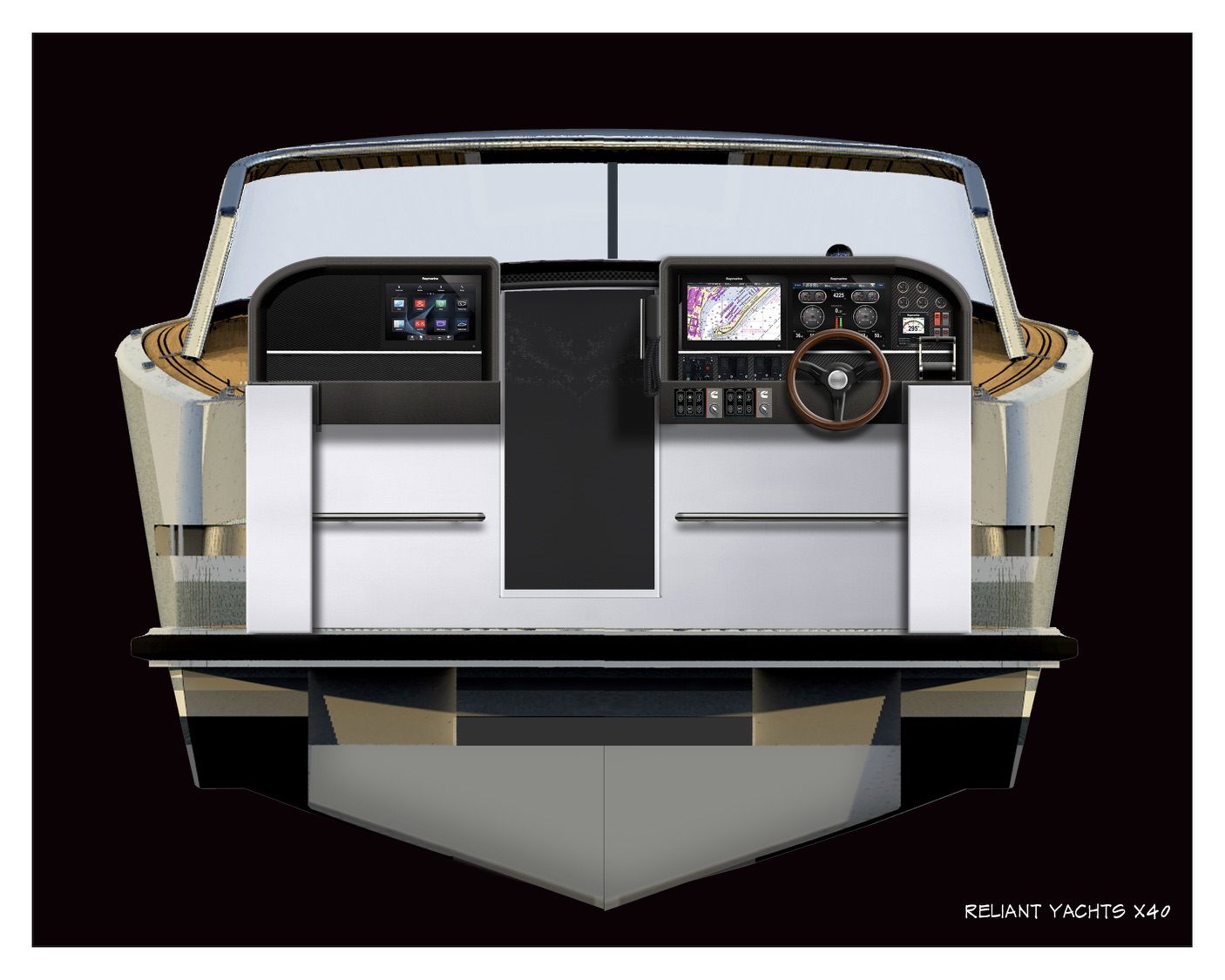 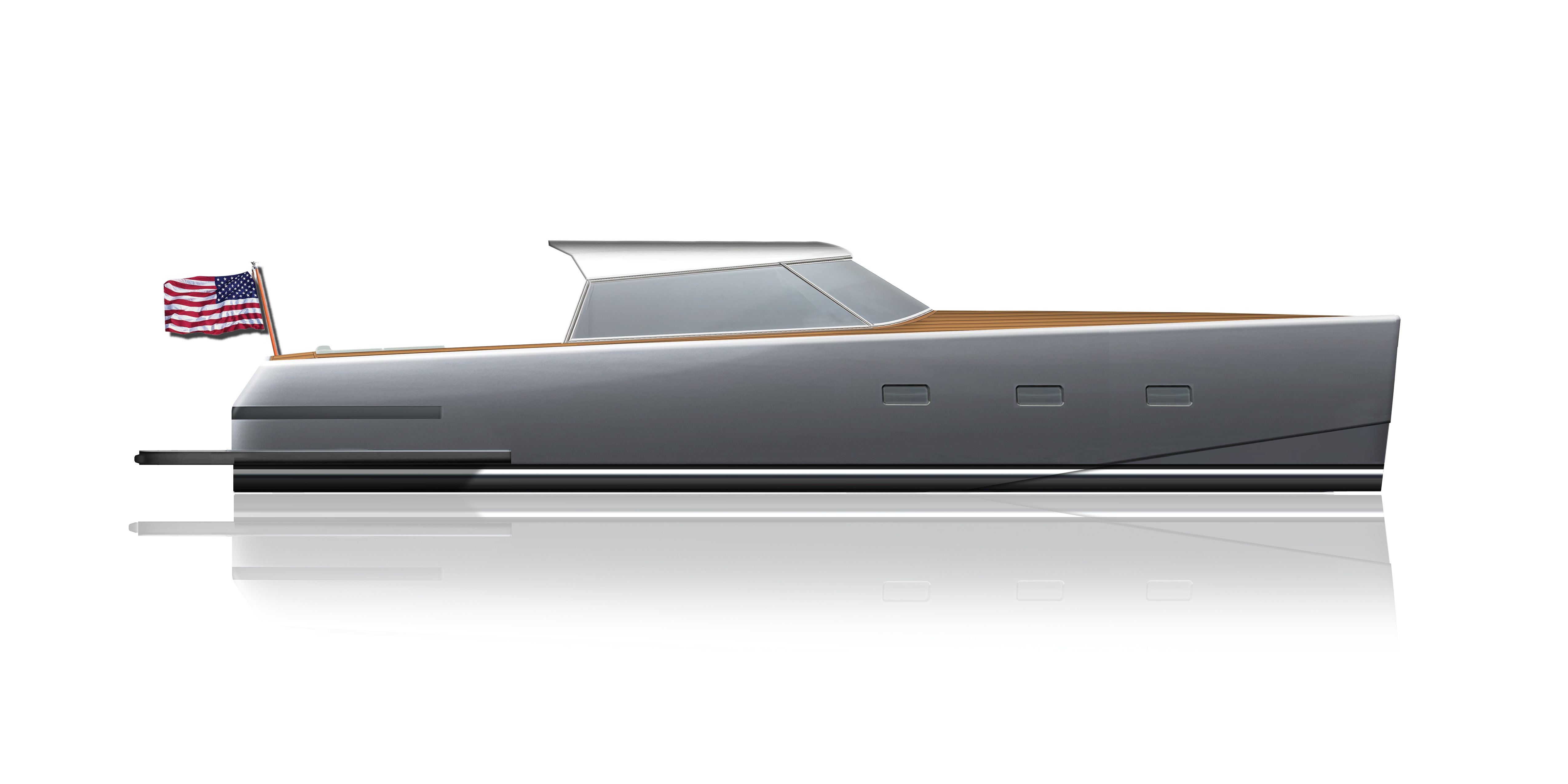 All three deliver this spring. Stand by for some exciting times.

Yachting Magazine has a great Chris Caswell article this month about the new Ocean Alexander 100. His point is that superyacht design elements are now being incorporated into  less-than-superyacht sizes. Specifically,

I won’t see this OA until the Fort Lauderdale Show (do the walkthrough with me!) but design-wise it looks to me like some very smart people hit their mark. As for their execution, I’ll reserve judgement on the stylings and finishes until I examine it up close.  You can find the article here:

Why am I raising this point now? Because we were hired to address this exact same challenge – superyacht elements in a smaller yacht – for a very knowledgeable and meticulous owner. Our amazing solution splashed just a few months ago: 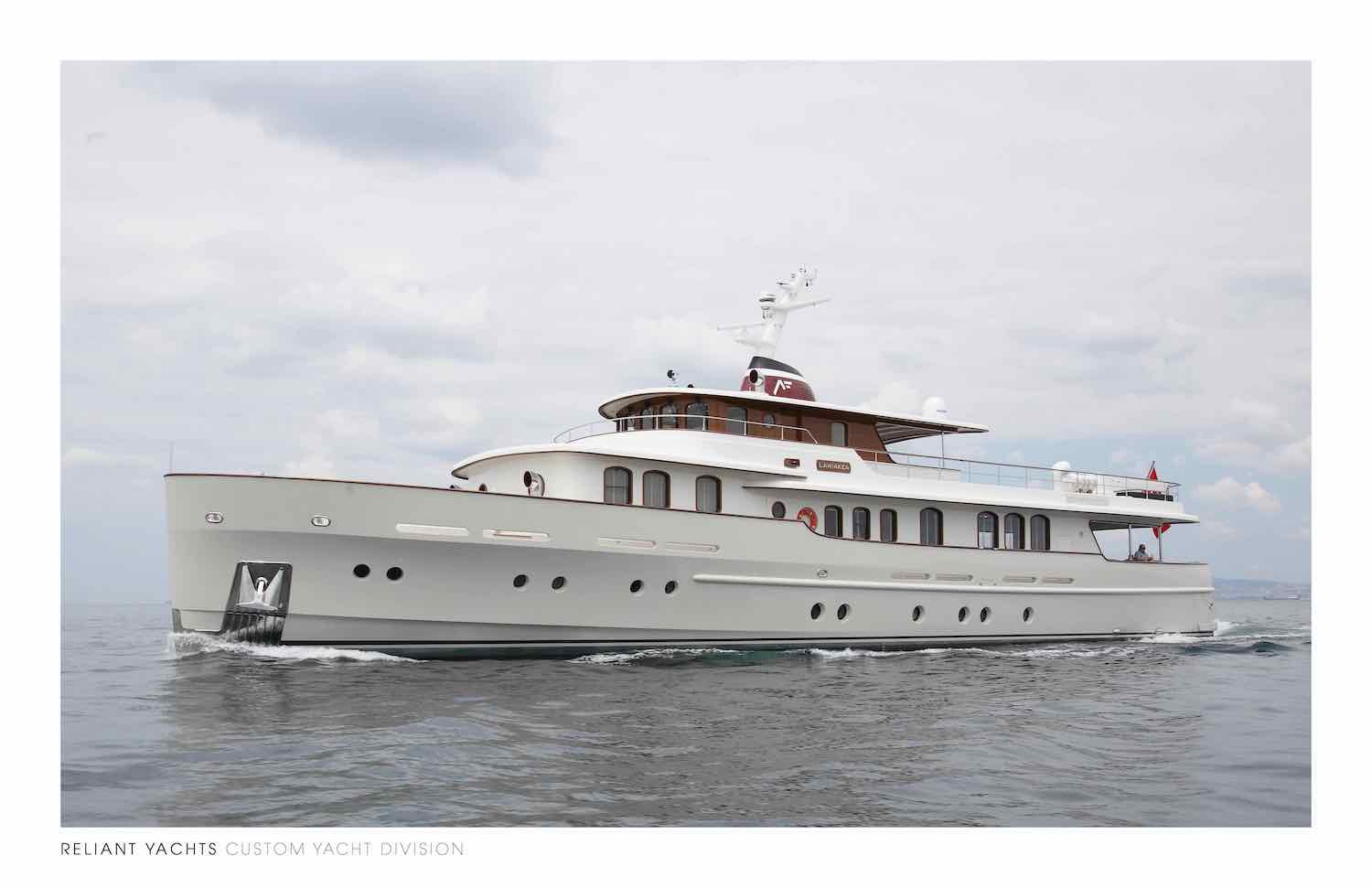 This Reliant Yachts 32 Meter is now cruising the Med, but with some warning I can get you aboard. Here’s the complete photo array, demonstrating what our designers and builders can do for you:

I will take this opportunity to note (or is it gloat?) that our 105 ft. mini-Superyacht costs significantly less than the OA 100, and we offer a far greater ability to customize your build to your needs. I urge you to call me for a fuller explanation of our unique process.

You’ve read here before about our listing for Dora, a custom Duffy 35: 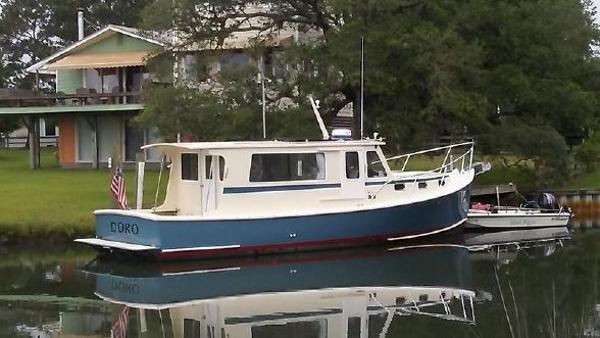 Well, autumn advances upon us, and she has not sold. So this week her price was reduced to $149,900. You can find the complete listing here:

Trust me, this fine little pocket yacht will soon be the subject of one of my snoozagrams (You snooze, you lose!) when she sells. Don’t let this one get away from you.

So that concludes our regularly scheduled broadcast on custom builds. It went longer than I planned, but before I sign off I’d like to leave you with a short story and a small gift.

I lost a week of my life this month to a back injury (and really, now, who hurts their back fly fishing?And not, I’ll add, for 100 pound tarpon?). 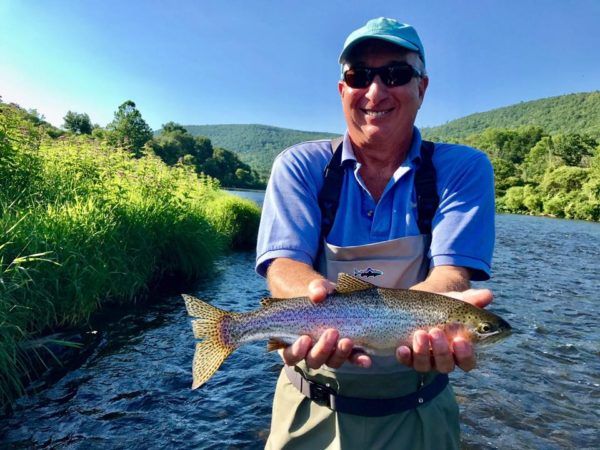 Anyway, I was in a ferociously bad mood until the marvel of modern medicine intervened. Towards the end of it my brother took pity upon me and sent me this video clip. He wrote: In my experience it is impossible to stay in a bad mood after watching this footage. And you know what? He was right. So here it is, a ten minute and nineteen second cure for whatever ails you. But you may not want to open it until you really need it? 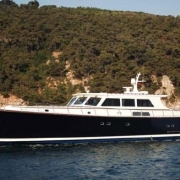