I. Crunch of the Week:

As far as I’ve been able to determine, The Fog Warning is the most widely read blog in this (rather small) industry. On average,  anywhere from 2,500 to 3,500 people around the world are regular readers (not counting shares and forwards, which I can’t track).  So a huge thank you to all my loyal readers for your continued support and engagement. And don’t be shy about sending these on to your friends and family. I do appreciate it.

I’m very happy to report that last week’s posting (that scary shipboard docking explosion) was the most widely read posting in the ten years I’ve been doing this. It had over 4,000 readers!

This could be a random activity blip, a lucky outlier, or maybe it just means people like maritime disasters. I don’t want to fall into the TV news practice of “If it bleeds, it leads,” but in biz you have to listen to your clients. So I’ll be sprinkling this kind of coverage around here and there, starting this week.

So here’s your crash of the week (literally), in one of my favorite harbors in the world:

The boat biz takes me to Portofino fairly often, but not so often that I lose my amazement over how many yachts cram themselves into that tiny harbor. Sometimes it seems you can almost skip from the cliffs on the west to the docks on the east by walking from boat to boat. But that doesn’t excuse this crash!

Last week’s posting attributed that explosion to the boat, and largely absolved the Captain. But this one? Sorry Captain, but this one is user error,  beginning to end. Even if his back up cameras weren’t functioning, boats of this size always have crew hanging off the transom with portable radios, keeping closely in touch with the bridge. A friend from La Spezia told me that the official explanation was “gear failure.” I don’t buy that for a second. What do you think?

A client called me last week to say this about his brokerage listing:

“It’s time for this boat to go away.”

Mind you, it wasn’t a sad statement, as he’s going to build a new boat. We had a long talk about how to make this happen, and when we hung up, the song Hello, I Must Be Going  popped into my head. Even if you know the song well (and who knew Groucho had a range of  one and a half octaves?) stick with it for his inspired dance at minute 1:45. Such amazing, physical humor:

So yes,  its time for our Reliant 40 Commuter brokerage boat to go away! Here’s her plans: 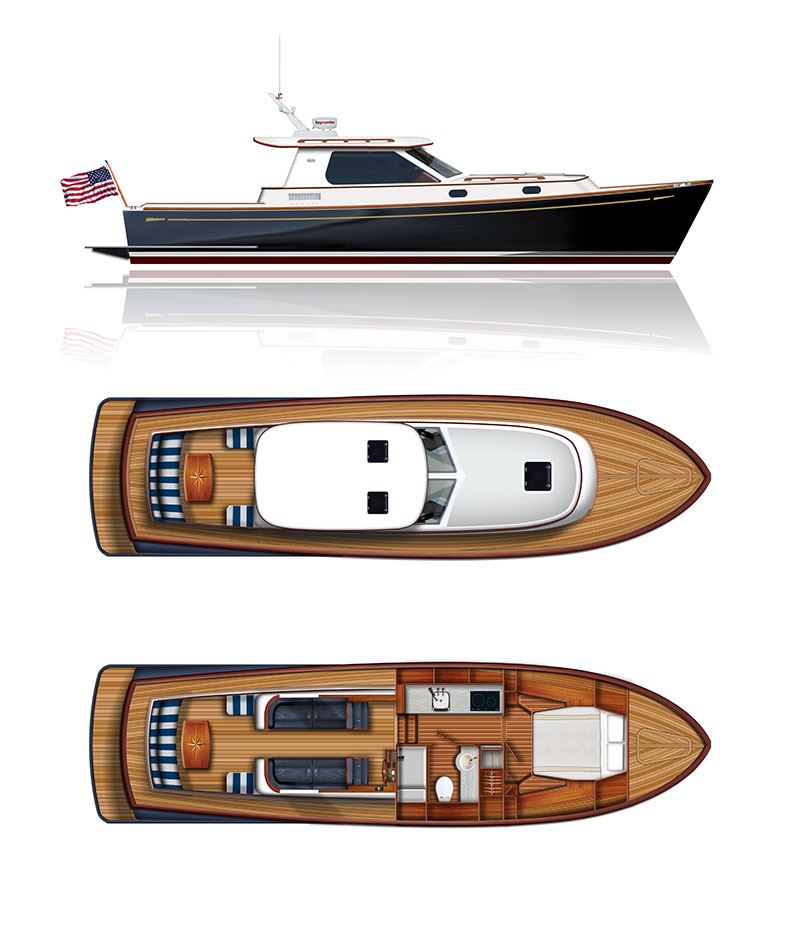 She is in Florida at the moment and will be coming north in the next few weeks. Which means you will have at least two opportunities to see (and sea trial) her this summer! 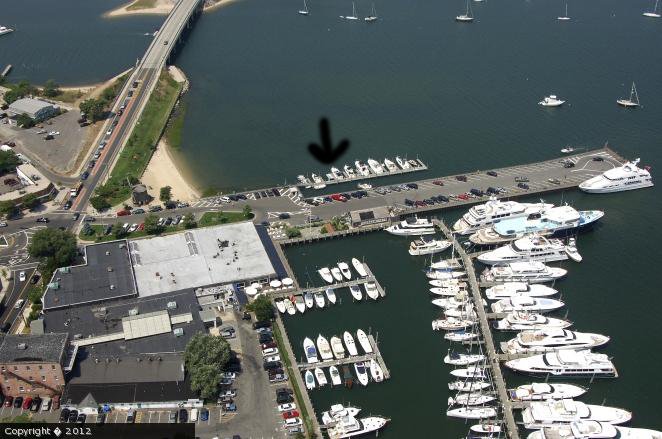 III. On The Subject of Brokerage

You will see some of our latest brokerage listings popping up here in the coming weeks. And that calls for another classic clip:

Why post this now (not that anyone needs a reason to laugh hysterically)? Because you have many choices in listing your boat for sale. I estimate that there are between six and nine thousand brokers on just the east coast who would be happy to list your boat. But if this video proves anything, it is that real talent is a rare thing. You can try to copy it, but nothing succeeds like the real deal.

At Reliant Yachts, between Dave McFarlane, Jim Ewing and myself, we’ve sold in excess of $50 million in fine yachts in our time. Our Rolodex (to use a word from a bygone era) is the deepest in the industry. There is virtually no one we don’t know, or can’t access, in the service of selling your boat for you.

What’s my point?  If you’re thinking about selling your boat, call me to work out an effective marketing strategy. As readers of this blog probably recognize, I love creative marketing.

If you’re lucky enough to spend your time playing in, on, and under the ocean, you probably have no shortage of passions. I certainly have more than my share. But if I have to choose one above the rest, it’s salt water fly fishing: 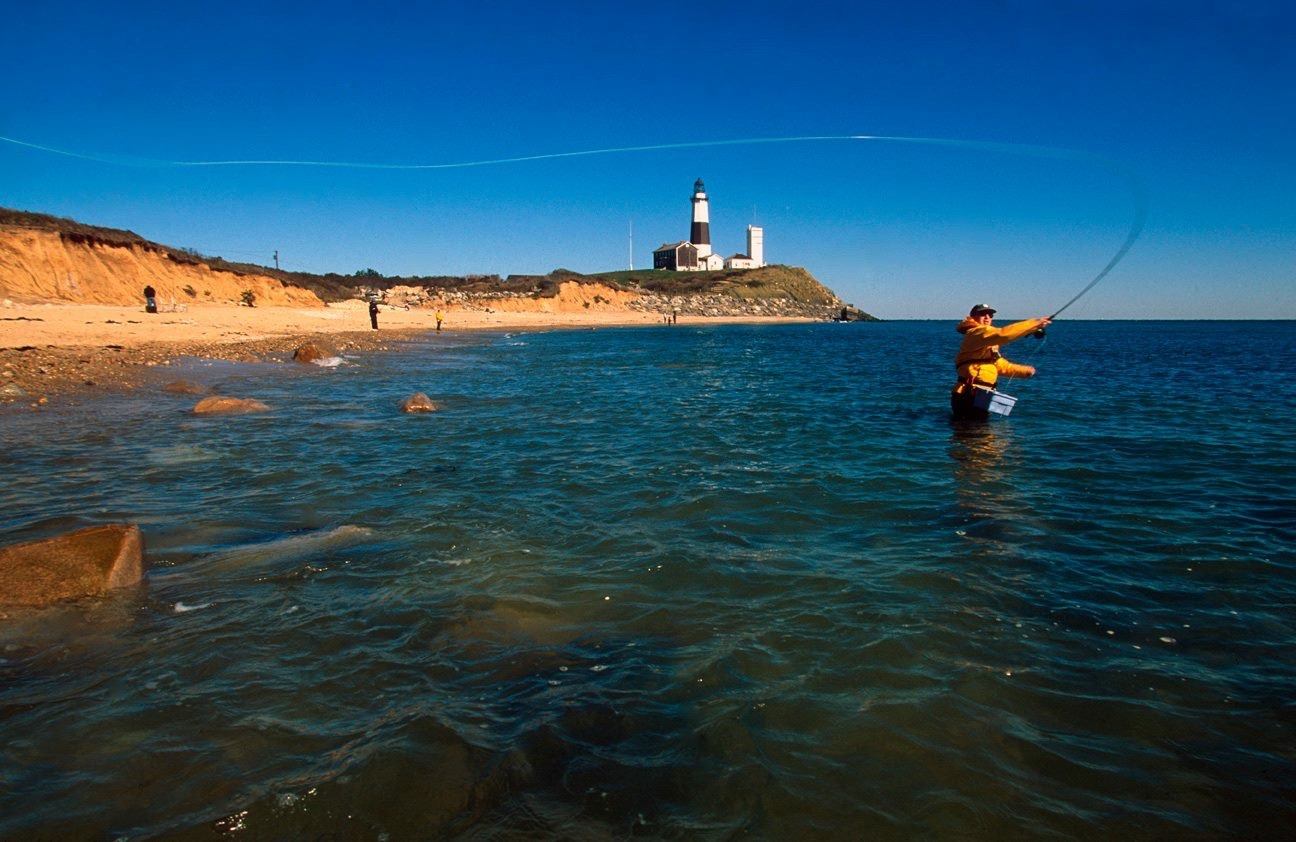 Last week I was on my flats boat at one of my secret spots in Peconic Bay. It’s a place where, when the stars align and the universe wants to smile upon you,  some very large bass can come into water as shallow as 24 inches.  Just as I was quitting for the day, out of the corner of my eye I saw a fish-as-submarine ghost her way up onto the flat (at +45 inches and +40 pounds, most probably it was a “she”). But while she was seen only from the corner of my eye, I was clearly front and center in hers. So she quickly ghosted back into deeper water before I could cast. She was the largest bass I’ve ever seen on the flats. She left me shaking.

I’ve been thinking about this fish, and the life she’s lived, all week. She’s probably thirty years old, or half my age. Which means that for thirty springs she has slowly made her way up from her Chesapeake Bay winter grounds, to feed or spawn in Long Island waters. Or perhaps she leaves Montauk to starboard and makes her way north to Nantucket, or downeast Maine.  She’s probably seen hundreds of flies and lures swim by her in her time, but wisdom born of age and experience has kept her safe. I’m sure she is far more worried about a Mako shark or a large seal than this middle-aged Jewish guy with a five ounce fly rod. But she was concerned enough to drift off my flat, and out of my life. I wish her well.

Writing this today I realize that it wasn’t the fish’s size that moved me. No, it was the size of her life. I’m humbled by the waters she’s travelled, the things she’s seen, and the lessons she’s learned. I add that special feelings to the many that have come from my time on the water. So I sign off now with this “message in a bottle for you,” my 4,000 loyal readers:

Get yourselves out on the water this week, my friends, and live large.