I think I can distill down to three simple words an answer to The Fog Warning’s eternal question of yachting:

What makes a yacht great, and why?

Those three words? Stable and Able. If your yacht delivers that for you in all respects, you’ve done well. So here in unit four of Zeelander University – Your Advanced Degree in Zeelander Ownership, we will take a deep dive into how to literally support a stable and able life afloat.

Our path today covers a wide range of stabilizer options here (there are more choices than you might expect). I can pretty much guarantee you’ll trip over some things you haven’t seen elsewhere. So kick back and enjoy.

I. Our summer and fall event schedule:

First, Labor Day Weekend! We will be displaying our brand new Zeelander 55 in Martha’s Vineyard that weekend, at the Harborside Inn Marina in Edgartown:

You can book your safe and private viewing of this fine yacht right HERE.

From there, you can find her for most of September – seven days a week – at our docks at Norwalk Cove Marina.

This wide open scheduling means that just about any time that works for you and yours will work for me and mine. Let’s make it happen!

Lastly, I am very excited to now share with you that we will be displaying the Z55 at the private Steelpointe Yacht and Charter Show from September 24th through the 27th:

We displayed our Zeelander 44 at Steelpointe’s last private, invitation-only event in July. I found it to be a safe and tightly managed event, one that found a new owner for our Z44!

Building upon that success, the September event’s invitation-only platform has tickets priced at $150 each. However, I have a limited number of free guest passes, so call quickly!

Now, back to class…

II. Stable and Able, with …. Stabilizers

There are more than a few ways to stabilize a yacht. Mostly I’m going to talk about mechanical stabilizers, but out of respect for George Clooney (who I was once pleased to meet on a Bahamas Vicem 85 charter), I’ll include a discussion of [non-mechanical, fixed] paravanes.

Anyone who has seen The Perfect Storm (and I don’t know any boater who has only seen it once) will remember what happened when George Clooney lost control of Andrea Gayle’s stabilizers:

For the record, loyal readers, I’ve never been aboard a boat that rolls the way the Andrea Gayle did above. If you have, I’d love to hear your story.

Paravanes are the oldest of four stabilization technologies used since the 1920’s, along with Flumes, Fins, and Gyros.

Also know as “birds” or “fish,” paravanes are simple, low tech, reliable, and effective at lower speeds. The physics are pretty simple: Long booms, as George Clooney so aptly wrestled with, hold the heavily weighted paravane birds out to the side, as a counterforce to a boat’s tendency to roll. You find them on commercial fishing vessels all the time, and on quality trawlers like Nordhavn’s.

In my view, If Nordhaven spec’s them, they work.

As for their downside’s, beyond the Clooney-esque efforts it takes to deploy and retrieve them, they only work for [slower] open water passages. It would be an entangling nightmare to deploy them in traffic. I’ll also note that the bird’s drag will cost you speed and fuel efficiency.

I’ve brought my share of yachts over from Europe and Asia on the decks of container ships. There are aways delays in receiving them dockside, as Homeland Security does a very thorough job of inspecting them (radiation detectors, anyone?). I usually don’t mind the delays, as it provides a fun Keyser Söze/Usual Suspects experience.

It was on one of these kind of handover delays that I first saw a flume system. Trust me, I had no idea what I was looking at – a massive system of tanks, pumps and valves unrelated to any other system aboard:

The goal is to manage the flow of water ballast as the boat tips from side to side. Here’s how it looks in motion:

I’ll note that of all the systems discussed here today, flumes are the only one that can effectively offset fore-and-aft trim as well. I’ll be discussing that challenge in greater detail below.

Moving back into the center of our stream, we all know Active Fin stabilizers. Quality engineering from ATBT_TRAC, Naiad, and Wesmar all share the same technology: Gyroscopes sense the motion of the vessel and hydraulic actuators then quickly rotate the fins to counteract. The reaction time has decreased greatly over the years (thank you, faster micro-processors) and zero-speed devices now work quite well even at anchor.

They can be hydraulic, electric, and even compressed air powered. In all cases, a generator is required. They require less space than gyros (more below) and aftermarket installs will usually fit (although the hull and stringers may need to be be substantially beefed up).

Tried and true, but I’ll note that they are deceptively complex systems. Their [expensive] components require monitoring and regular maintenance. The list of those components is long: Engine driven hydraulic pumps, hydraulic fluid tanks, sea water circulators to cool the fluid, actuators, seals, through hulls, and more.

I’ll also note that hydraulic cables run through and around guest cabin bulkheads are noisy beasts when those fins are moving this way and that.

There is also the added complication of yet another underwater appendage exposed to possible damage. You may remember my post The Ghosts in the Machine, which highlighted engineer’s “test-to-destruction” methods in IPS development. Well, stabilizer engineers have tested fins in exactly the same way, as shown here:

My conclusion? While there are those that say that excess drag decrease fuel efficiency and speed, I find fins are a thoroughly reliable way to deliver a stable and able yacht.

An aside on running speed: Stabilizers of all types really come into their own on [slower] displacement and semi-displacement yachts. The basic physics of laminar flow means that boats that run in the water rock-and-roll a lot more than boats that run on top of the water (i.e. planing hulls). When a planing hull climbs up and goes, much of her hull is above the surface, and is (fortunately) less unaffected by wave state. Much more on that below.

Fins, digging deeper down, work with a predictable efficiency at all speeds. It’s not commonly known, but you have to pick your optimal cruise speed up front when adding fins, in the design stage. The faster your pre-chosen optimal cruise speed is, the larger (in square feet) your installed fins must be. Fins chosen for a 30 knot cruise speed will be as much as 33% bigger than a 15 knot speed. Just saying….

Nature may abhor a vacuum, but gyro stabilizers (like those made by Seakeeper) couldn’t live without one!

Because in that vacuum a massive ball (in the 800 pound range) spins at almost 10,000 RPM. That’s only 20% less than your average high-speed woodshop router. But it can only reach that RPM (at least in the space, current consumption and cooling capacity a yacht can reasonably deliver) in a vacuum.

The benefits are huge – When you spin that much weight, that fast, in a vacuum, you generate enormous torque. Transfer that torque (securely and directly) to a boat’s hull, all that power goes to work in eliminating roll.

How much power? Well, the smallest model, the Seakeeper 2 (found on outboards, these days), generates as much as 3,870 foot-pounds of torque. For comparison, the maximum torque a single 425-hp Cummins diesel exerts on its crankshaft is 1,050 foot-pounds. You can see the physics of its all it in action here.

Of course it wouldn’t be Zeelander University without some history. So, to quote The Talking Heads, how did we get here? Well, thru some genius, actually, in a story that proves lightning can in fact strike the same place twice. In the yachting industry, it struck Shep McKenney twice, with huge payoffs for us all.

In the early 90’s Shep was a part-owner of Hinckley Yachts. While jet drives have been used in the boating world since the 1940’s, they lacked a simple user interphase. Shep, looking at joystick controls on NASA capsules, was sure he could buy an off-the-shelf joystick solution to marry to a jet drive. When he couldn’t source them, he brought together a team of hardware developers and software engineers to build one from scratch. It was a huge financial undertaking, at a time when Hinckley was seriously struggling. He really did bet the farm. But he won, brilliantly.

Similarly, twelve years ago Shep heard about some advanced work being done in New Zealand to stabilize high speed catamaran ferries by integrating together foils, tabs, interceptors, microprocessors, and massively beefed up stringer systems. In his words:

“When I saw what the basic device was, we realized that if we could spin it in a vacuum, it would mean we could make it much more efficient and environmentally bulletproof and control it actively, and therefore get a lot more out of the basic physics of the thing.”

Today Seakeepeer owns 90% of the worldwide gyro market. In my view, they’ve earned every sale. Because with an anchored (or, as with our Zeelander 55, an IPS Dynamically Positioned) yacht full of guests in heavy rollers, no one spills their drinks.

There are some costs to gyro technology:

There are a ton of video’s showing Seakeepers in practice, but the truth is I’ve never found one that accurately communicates the actual seat-of-your-pants effects they deliver. For that, come with me for a sea trial aboard our brand new Zeelander 55. I’ll do my best to find us some rough water, and you and yours can feel it for yourself. I expect you will feel what I have – It’s a little like King Neptune himself reaches up from the sea floor and grabs onto your keel. I’ve done this in six foot rollers outside Port Everglades. It was a remarkable experience.

I’ve been building towards this, and thanks for your patience. If you read in and between the lines, I think you get why I’m such a fan of SeaKeeper technology.

Embarrassing Truth Alert: While I’m privileged to spend 200+ days a year on the water, I do get seasick (especially early in the season, pre-sea legs). Low speed offshore trolling for tuna, inshore SCUBA trips (waiting in a long line for my turn to jump overboard, amid the rock and roll) or hanging upside down in a rolling bilge, looking for an errant bolt – these things take their toll on me. Hitting the ENGAGE button on the SeaKeeper panel is my ace in the hole.

Personally, I find stabilization less critical at higher speeds. It’s more about general comfort than avoiding seasickness. But my guests may disagree. And for that I recommend a different technology:

You’ve seen this variously labelled over the years (ZipWake, Interceptor, Humphree). Essentially they are extremely rapid-fire, computer controlled trim tab blades, instantly adjusting for both side-to-side and fore-and-aft conditions. They really come into their own at planing speeds, exactly the point where gyro’s become less useful. Having both technologies working together is a game-changer.

Volvo Penta’s has now purchased fellow-Swedish company Humphree, allowing their IPS systems to seamlessly integrate these two technologies. That’s what we offer on our Zeelander models, and you can see it in action here:

F) Conclusions of the Day:

The proof is in the buttons! Do a sea trial of our Z55 with me – one where I can instantly engage/disengage both its SeaKeeper and its Interceptor systems with a touch of a button- so you can see for yourself why they are such an integral part of the joys of Zeelander ownership.

And finally, you can experience this for yourself at our Martha’s Vineyard, Norwalk, or Bridgeport events this summer. Please book your appointment right here.

Meanwhile, stay stable and able, and call me about any little thing. 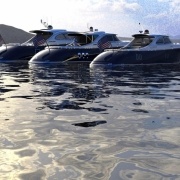 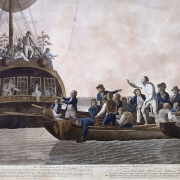 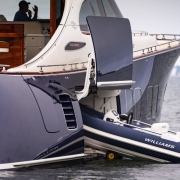 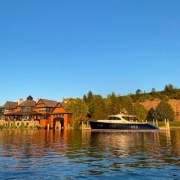 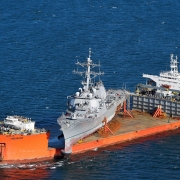 The Survey from Hell 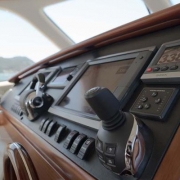 The Ghosts in the Machine
Hartman Yachts Livingstone 24