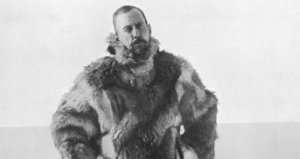 “When you spend enough time on boats, there are going to be moments when you wish you were just about anywhere else.” 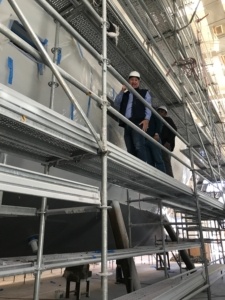 That’s been true for me here and there, and sooner or later you may find it true for you. In preparation for all possibilities, I invite you to join me today for a graceful meander down a path that skips through Newtonian physics, yacht building best practices, boat loss insurance data, and that ever-exciting world of explosive welding.  Most of this will tilt toward big boats, but there is a method to my madness – A boat is a boat, and knowledge is power. Who knows, someday you may thank me for this post (but let’s hope not).

I. The Physics of the Matter 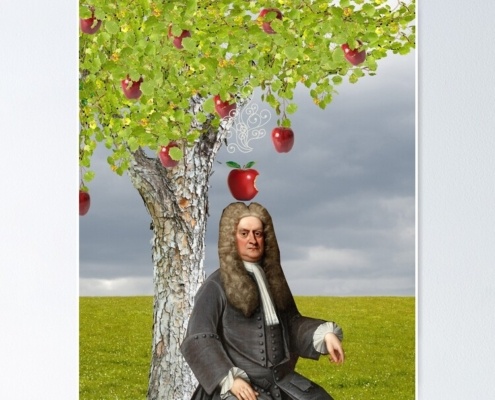 Let’s start with Sir Isaac. It seems the mythic story of Isaac Newton’s apple – the one that delivered to him (and us) the truth of gravity – is not a myth. Best evidence shows that it actually happened, and in fact the the grandchild of that tree can still be visited. Perhaps a visit will provide your own inspirations. 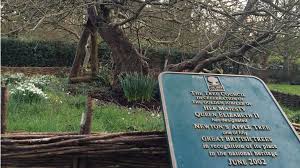 Said apple fell during during England’s Bubonic plague of the mid-1660’s. Newton was “socially distanced ” in a farmhouse for two years, and he later explained how the plague allowed him to do his best work:

“I was in the prime of my age for invention & minded Mathematicks & Philosophy, more than at any time since.”

I’m certainly no Newton. And I’m no engineer (I just play one on TV?).  But socially distanced as I am here in the Hamptons, I’ve begun to wonder about …. impact forces! Last week we discussed the hazards of sea collisions with shipping containers. 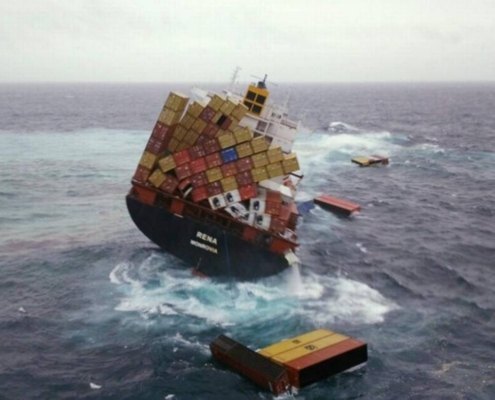 I’ve always managed my businesses with the philosophy that “What can’t be measured, can’t be managed.” So how, I wondered, do shipbuilders intelligently build around impact forces they can’t measure? Clearly, there must be a way. But I found hard answers hard to come by. Google didn’t help much, so I posted some question on  yachting forums I respect, both recreational and commercial. No dice there, either. Then I reached out to some of my amazing clients (I really do have some of the best and smartest clients found anywhere), and hit the jackpot.

I have a client who is a major league quant. He started his career as a particle physicist, and now works as a derivatives trader (and is a skilled baseball data hobbyist.)   He explained that impact forces between moving objects are measured by something called (thank you, Sir Isaac)  “Kilonewtons.” He directed me towards an idiot-proof app called  Gigacalculator.  There I was able to easily plug in the following assumptions:

You’ll see here an average impact force of 329 kilotons and a peak force of 658 kilotons. A torpedo, basically. 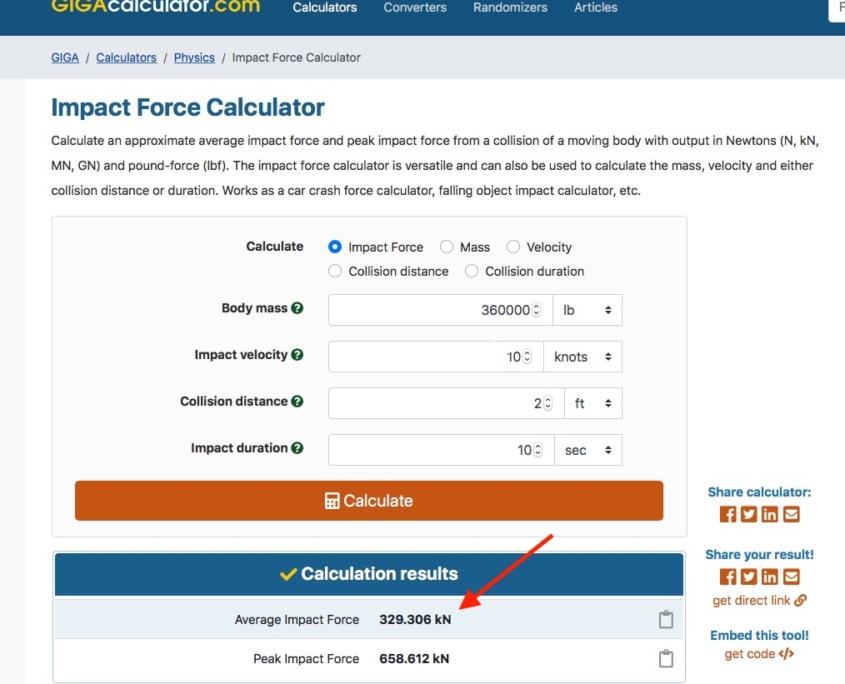 Loyal readers may remember my blog post entitled “A Survey from Hell” about the damage incurred by the guided missile destroyer USS Fitzgerald. This painful tragedy resulted from an [entirely avoidable] collision with a freighter in the Sea of Japan: 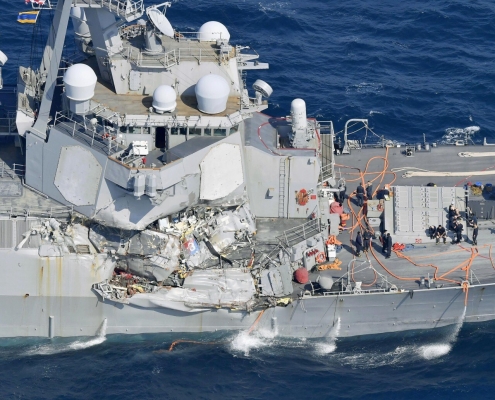 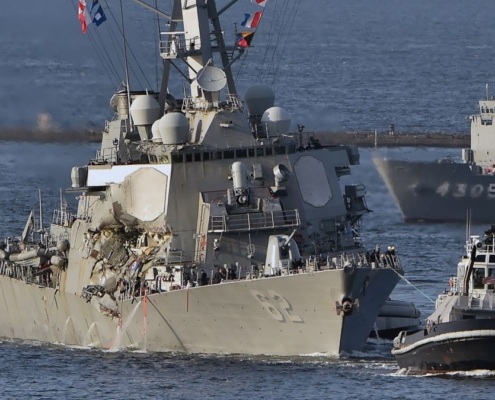 I can’t calculate those kind of forces, but let’s stick with our shipping container model. My understanding is that 600 kilonewtons is roughly the force delivered by a 60 ton hydraulic press. Seeing this demo, I can imagine what this could do to a ship’s bow. 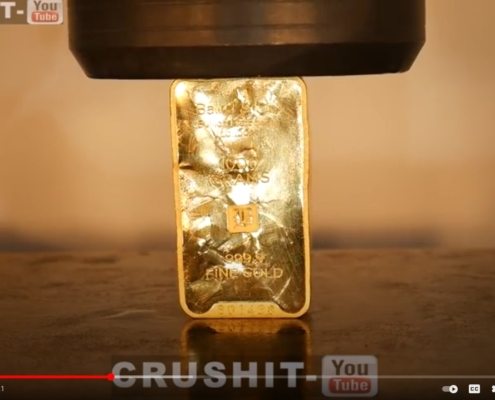 As for what happens at the point of contact,  I’ll direct you to a well-thumbed book off my bookshelf: 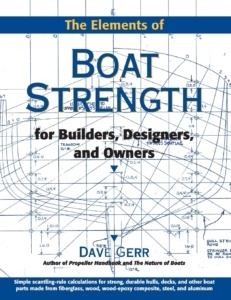 It turns out what sinks a yacht, technically, is not frontal damage to the bow. Rather, it’s the resulting side forces, which force the hull sides outward. That sideways pressure, as you’ll see here, breaks the welded joint connecting the hull to the all-critical waterproof bulkhead: 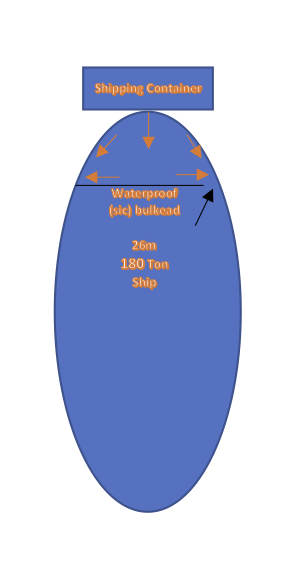 This is what keeps yacht and ship builders up at night. It’s not the durability of the steel or aluminum plating. It’s all about the welds!

I entitled this section “Ship-Building” in reference to my closing plea in last week’s post,  There is No Bad Weather, Just Bad Boats :

But to me, if a client is going to spend $5m, $10m, or far more on a true ocean-going vessel, it’s because they want the challenge of rounding Capes – not puttering though canals. They don’t need slick marketing or magazine cover shots, convenient labels or copycat builders. In my humble opinion what they need is a ship, not a boat, and that ship should be built in a shipyard, not a boatyard, and it should be a Dutch ship, or one that aspires to that level.

In other words, a quality Dutch shipbuilder and shipyard like Hartman Yachts.

Hartman has building ships for seven generations. Johan Hartman, the current owner, was commanding ocean-going freighters at the age of 22. His builds are the state of the art, mission-critical ships, whether for commercial or private usage. Hartman, 100% privately owns, builds and operates a fleet of +100m ships like these:

In fact, if you order a new Long Island 40 Classic like this one, for end-of-2021 delivery…

…. she may very well come to the USA on this very yacht-transporting Hartman freighter:

And if you need to move a damaged destroyer across the Pacific, well, Johan can certainly build one of these for you as well. 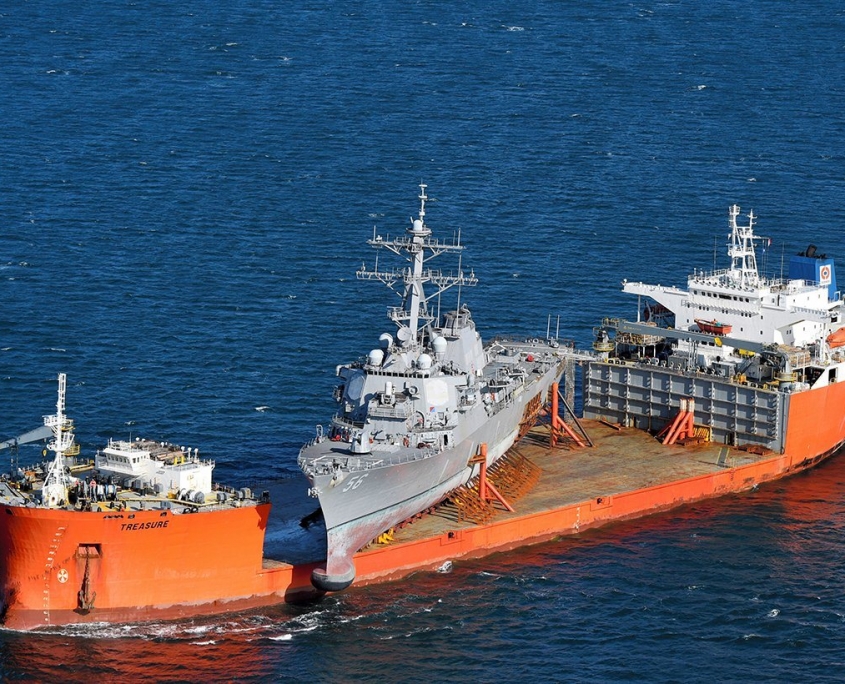 Now, back to welds…. I’ve been to shipyards all around the world (including Turkey, Vietnam, and China) where they still rely on basic acetylene torch technology: 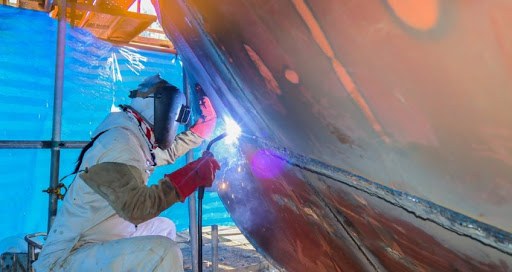 But welding from premier shipyards is now done with computers, using solid-state welding machines that provide maximum control of things like (come on, I know you really want to know) waveform shape, the pitch of the leading and trailing edges, pulse settings, crater time, burnback time, and much more: 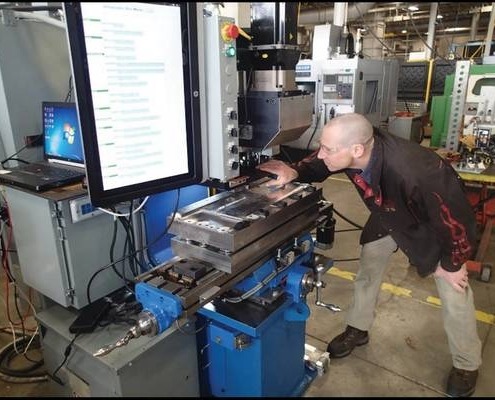 After that, impact-dependable welds depend upon extensive and continually upgraded staff training and the correct choice in welding wire.  Once again, it ain’t easy. Or cheap! In the early stages of a build – those involving long, continuous welds in a flat position – the best practices is to use a very expensive, special metal-cored wire, called Coreweld C6. 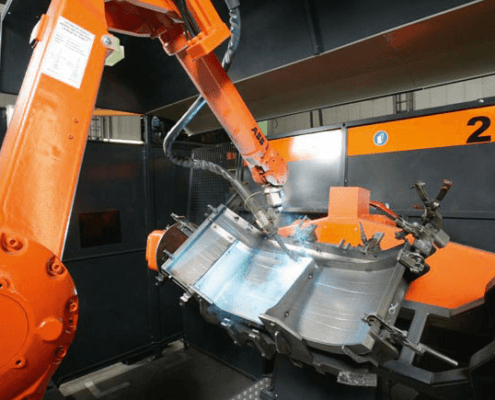 It costs much more than standard flux-core wire, but as in all things, you get what you pay for. Later in the construction, when they’ve run out of flat runs and the hull begins to take its final shape, a different wire is called for: Dual Shield 70 Ultra Plus. And finally, for ship areas with thinner plates, AristoRod comes into play – a bare, solid wire alloyed with manganese and silicon.

For considerations of weight and performance, quality yachts like Hartman’s Livingstone 24 must join its steel hull to an aluminum superstructure. And without the most exotic of materials and practices, that is impossible – You cannot just weld steel to aluminum. The hear required to weld steel liquifies the aluminum. You’ve got to get hi-tech…

… and built yourself a “ship sandwich” by:

It’s called explosive welding. It was discovered in WWII, when B52 crews found strangely fused metals resulting from iron shells blowing through their aluminum-skinned planes. 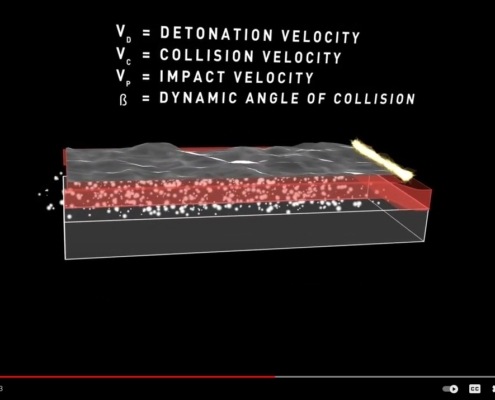 and here it is in real-world production: 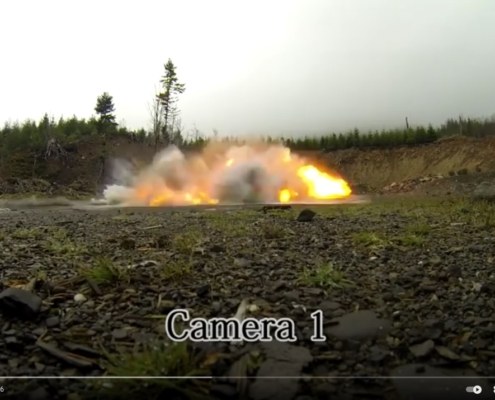 And that, my friends, is how you build a ship sandwich!

I’m going to step away from impact damage now to talk about a statistically more likely scenario out in the great beyond (or in the middle of your home channel). When it comes to outright sinking, insurance company data shows that only 4% of boats sink from collisions. The main culprit, at 40%? Water intrusion. Yup, your basic and boring seawater inflow through open hatches, doors, and blown thru-hulls. Check out this recent example, where a yacht ran aground in the middle of the night, in the middle of  a supposedly navigable channel: 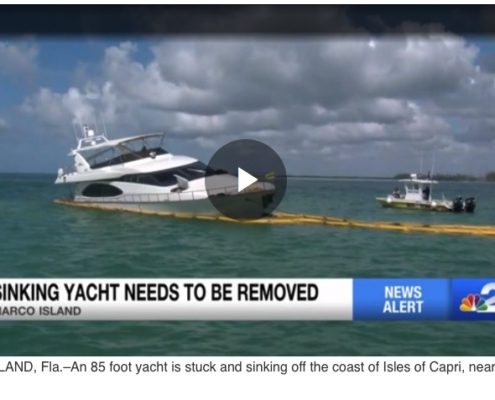 With her stern exposed to following waves, eventually the sea found its way in through the stern’s tender garage. Trust me, nothing good ever happens after that.

Now, long-time clients will recall my take on tender garages in the post Love me Tender.  All in all, I really preferred this much safer, side opening alternative: 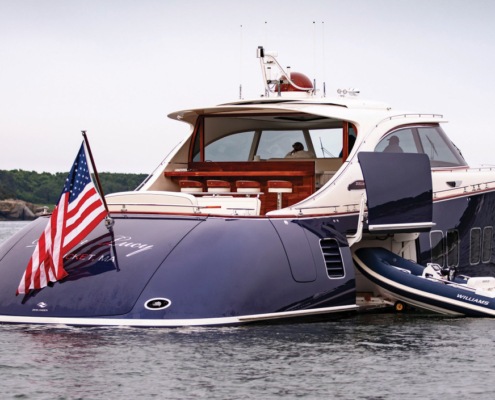 Speaking of Zeelander, the Demo Z55 that I showed many of you last fall is still available, and will be displayed at the coming Palm Beach Boat Show.  You’ll find that opportunity HERE. I’ve run this fine yacht a bunch, so by all means launch a flare if you’d like to hear her full story. I’d be delighted to meet you at the last day of the show, Sunday March 28th.

From there I’m off to to Holland to celebrate the splash of Hull #1 of the new Long Island Yacht 29 Classic,

and to investigate this [currently hush-hush] project: 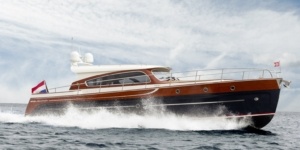 Of course I’d be delighted to meet you in Holland in Early April. Please call me for EU entry details.

OK, more to follow on collisions, sinking and other mishaps. Please stay tuned for your next blog post, where I will explain why your bilge pump sucks (in fact, it’s almost useless). And I’ll explain what I think you really need when things go wrong.

Meanwhile, thanks for all you do. And as always, for whatever you need, just launch a flare! 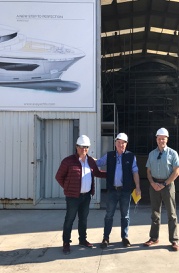 PrevPreviousThere is no bad weather. Just bad boats!
NextReally now, what is a Dayboat?Next 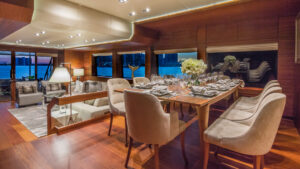 When a “custom” yacht is not enough….

I’ve been watching three themes that have gathered speed and power over the last two years. While they were set into motion before the pandemic, 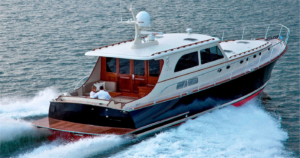 …. I’m back with Vicem! Yes, loyal clients, it is true. After a nine-year break, I am beyond thrilled to be reunited with my old 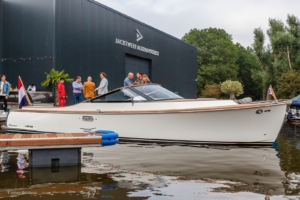 It is no secret that September is just about the busiest month in the boat biz on both sides of the pond. Racing around as 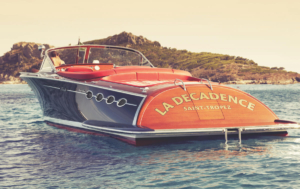 St. Tropez? Napoli? How about both?

I. Fancy Free Clearly, good things come to those who wait. And with Western Europe finally open to vaccinated Americans, off I go. If Europe